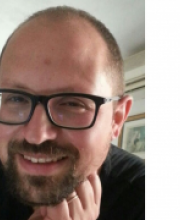 Subject: The Transition from The Upper Palaeolithic To the Epipalaeolithic In the Southern Levant And the Development of The Microlithic Technology.

Abstract: The doctoral dissertation focuses on one of the important developments in the of ancient hunting methods in the southern Levant. This change took place during the transition between the transition from the Upper Paleolithic to the Epipaleolithic periods (some 25,000 years ago), due to the development of microlithic tools (small stone tools, carefully designed in standard shapes, used to form composite projectile tools).
The study examines stone tool assemblages from several sites in the southern Levant from the end of the Upper Paleolithic and the beginning of the Epipaleolithic. By combine three different methods to analyze stone tool production (attribute analysis, experimental knapping and core refitting) the study aims to trace the source of this change and its evolution in terms of chronology, technology and style.

Bio: I have a BA and MA from the Classics Department of the Hebrew University. My PhD study deals with the verbal conceptualization of nonverbal cues in Ancient Greek. I am also interested in Greek phraseology in general, Greek sociolinguistics, representation of interpersonal communicative conventions in classical literature and characterization techniques in Greek literature. Also, I teach Greek and Latin and write and translate poetry (in and into Hebrew).

From Jonah to Jesus and back: three Ways of Characterization and their Reverse Application (Paper in proccess)