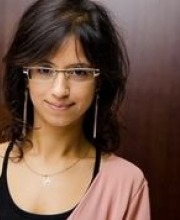 Abstract:  My study focuses on a handful of Latin authors who followed Augustine – Paulus Orosius (d. c. 418), Prosper of Aquitaine (d. c. 455), Quodvultdeus of Carthage (d. c. 450), and Salvian of Marseille (d. c. 480). Together, these men composed some twenty-four original works of various genres—letters, sermons, theological treatises, histories. Despite the abundance of these writings and their authors’ high ecclesiastical rank, these works have been under-appreciated, their influence under-acknowledged, and their style and content only randomly studied and never systematically evaluated. By considering this elite group and their work together, the study aims to assess their literary, theological, and social contributions both to their congregations and, more generally, to the intellectual discourse of the late Latin West.

The Conversion of Space VS the Conversion of the Population: Fourth Century Palestine, Rosetta Journal, Vol. 24 (2019), pp. 38-52.
Access online: http://www.rosetta.bham.ac.uk/issue24/Hajbi.pdf