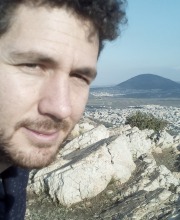 Research subject: "Keep the Commandments": the construction of "the Commandments" and their role in forming social identity in Christianity and Judaism in late antiquity.

Abstract: In my dissertation I intend to examine the ways in which the discourse on the Commandments ("mitzvot") functions as a tool in the attempt to reshape religious communities in the Jewish-Christian space of late antiquity. During this period, different communities continue to insist on keeping and practicing in one form or another the "Commandments", but often without a clear definition of the meaning and scope of this term. At the same time, the concept of the "Commandments", serves as a polemical tool in both Christian and Jewish texts, but even there it is difficult to find a clear and unequivocal definition. In my dissertation I will seek to trace the ways in which this category is used to reconstruct the religious discourse and practice in late antiquity.