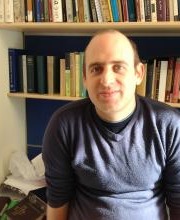 Subject: "Pure Thinking as a Non-Aesthetical Stance of Cultural Historicity: A Systematic Investigation in the wake of Herman Cohen's System der Philosophie"

Abstract: In my dissertation I aim to analyze and justify a radical Rationalist philosophical position, as it is embodied in the Neo-Kantian System of Philosophy (System der Philosophie, 1902-1912) of the Jewish-German Philosopher Hermann Cohen. I offer both a reconstruction of his systematic claims and a reevaluation of his stance in a larger philosophical and cultural context. My contention is that according to Cohen, Rationality is a stance of cultural historicity. Contra to the way Rationalism in general and Cohen in particular were taken, I understand rationalism (and the related "Critical Idealism") not as a stance alienated-to-experience and the so-called 'truth' of concrete human existence,' but rather as a deliberate (moral) resolution to approach historical human existence after a set of theoretical concepts has been established as coherent and Moral. I offer a philosophical discussion on the cultural consequences of such a stance, following Cohen but independently of his writings, and a paradigmatic case-study, namely the philosophical reaction to and analysis of the Nazi 'cultural fact' (Kulturfaktum). I thus discuss Cohen's philosophy and its implications both in a purely philosophical 'technical' context and as a productive cultural stance for post twentieth-century (democratic) societies.