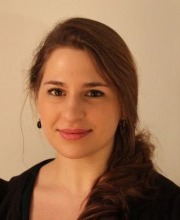 Department of History of the Jewish People and Contemporary Jewry

Abstract: Using case studies, my research into medieval Jewish communal identity challenges contemporary academic use of the category of “community" as an analytical tool. Using Hebrew, Latin and vernacular sources, I explore how communal identity was built and developed through complex social processes and sets of interactions. By comparing and contrasting Jewish communities in the lands of the Crown of Aragon and in Ashkenaz, I hope to propose a new framework for how we can think of medieval Jewish communities in a theoretically nuanced way.

Bio: Miri is writing her PhD in Medieval history, comparing and contrasting Jewish community life in the Crown of Aragon and Ashkenaz, 1100-1347. She uses social history and social theory to investigate the realities of Jewish communal life and investigate how communities were constituted by the everyday interactions and relationships. Miri holds a BA in history, and an MPhil in philosophy of religion, from the University of Cambridge. She was the Henry Fellow at Yale Graduate School 2011-12, and has spent two years learning in egalitarian yeshivot in New York and Jerusalem. She also edits academic texts in English. Under the supervision of Prof. Elisheva Baumgarten, her thesis is entitled “Everyday Life, Identity, and Communal Relations: A Comparison of Kehilot Shum and Aragon, 1100-1347.”

“The Lives of the Dead in Medieval Ashkenaz,” in In, Out and In Between: Jewish Daily Life in medieval Europe, eds. Elisheva Baumgarten and Ido Noy (2021)

“Absent Husbands and Lonely Wives”; Clearing Refuse in Medieval Cologne”; “Instructions to my Sons and Daughters: The Ethical Will of Eleazar, an 'Average Jew'”; “Piety Even in Death: Rabbeinu Bahya Commenting on Ashkenazi Custom”; R. Yom Tov’s Suicide”; “Remembering Pietism in Ashkenaz from Spain”; “The Attack on the Jews of York in 1190 Reported in Christian Sources”; “The Sweetness of Learning Torah”; “Using Your Wife’s Money to Pay Your Bills: Meir of Rothenburg Responsa,” in Jewish Daily Life in Medieval Northern Europe, 1000-1350: A Sourcebook (Medieval Institute, Michigan State University Press, forthcoming 2021)

“Hasdai Crescas, Grounds for assertions about God and the philosophical use of scripture,” Journal of Scriptural Reasoning 15 (2016).