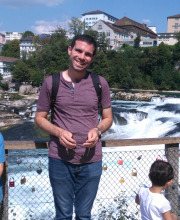 Bio:  My name is Hananel Shapira. I am married and recently also a father. I am currently studying for a PhD in the Department of Bible at The Hebrew University of Jerusalem, after completing both my Bachelor's and Master's degrees combining studies in the Department of Bible and the Department of Archaeology and the Ancient Near East at The Hebrew University of Jerusalem. I am also an alumnus of the Mandel School for Advanced Studies in the Humanities. My research work is focused on the development of ritual in the Bible and in the Ancient Near East generally. My research interests include (but are not limited to) the formation of the Pentateuchal books and especially the priestly portions in them. I am an avid fan of ancient languages and texts written in them.

Subject:  External Rituals in the Priestly Writings in the Pentateuch

Abstract:  While previous works have focused on the trend to increase the priestly involvement in non-ritual civil issues, In my research I aim to demonstrate that a comparable process took place at an even earlier stage within P, with regard to ritual topics. In several priestly laws, dealing with rituals occurring outside the tabernacle, the Urtext (the supposed original textual version) does not appear to require any priestly presence, and they were later adjusted to fit the norm of priestly presence. This conclusion enables a refined understanding of the priestly self-perception: initially, the priestly authors of this document saw themselves as merely temple officials. With time, they came to perceive their role in religious life as overseers and regulators who must be involved in any ritual action conducted.