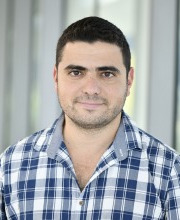 Subject: Israel's Intervention in Lebanese Civil War (1975-1982) as a Case Study of its Policy in the Region

Abstract: My dissertation will examine Israel's policy towards Lebanon from the late 60's until 1982 Lebanon War, and will especially focus in Israel's Involvement in Lebanese Civil War (from 1975). In this paper, I will analyze the following issues: the nature of the involvement; the course of events that led to the first Lebanon war; the processes and consequences of the intervention in terms of Israeli society and its influence on foreign policy; and finally, the compatibility between Israel's actions in Lebanon and its stated policy in the Middle East.

Bio: I completed a BA in Islamic and Middle Eastern Studies and Jewish History and Contemporary Jewry, and MA in Israel Studies - both in the Hebrew University of Jerusalem. My Master thesis - ''Villa in the Jungle?': Israel's Involvement in Middle-Eastern Conflicts as Part of its Policy in the Region, 1949-1970' - dealt with Israel's clandestine policy in the Middle East, and focused in Israel's interventions in two Intra-Arab conflicts: Yemen’s civil war (1962-1967); and 'Black September' crisis in Jordan (1970).