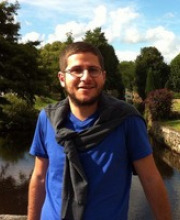 Subject: Hegel on Truth and Appearance

Abstract: In my dissertation, I propose to analyse the structure of Hegel’s first main work, Phenomenology of Spirit, in a way I believe has never been seriously perused before. The Phenomenology’s atypical structure has been usually explained as a succession of chapters termed moments, but it equally consists of two parallel series of descriptions – appearance “for consciousness” and truth “for us” (philosophers). I believe that by exploring this often-neglected aspect of the Phenomenology, I will be able to provide a more accurate understanding of Hegel’s concepts of truth and appearance. This with the aim of arguing that according to Hegel, reaching philosophical truth is a way of stabilising the empirical world of appearance.

Bio: My primary field of interest is German philosophy after Kant and its influence on 20th century as well as on contemporary philosophy. The subject of my dissertation is G.W.F. Hegel's concepts of truth and appearance as they can be understood from a study of the structure of Hegel's major work Phenomenology of Spirit. In addition, I translate philosophy from French and German and take interest in the history of philosophy in Israel.

“Kenley R. Dove, Joseph Gauvin and the “for us” in Hegel's Phenomenology”, Hegel-Jahrbuch, forthcoming.