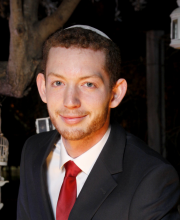 Subject: The Shared Traditions of the Aramaic Targums and Second Temple Literature

Abstract: Collecting and classifying of exegetical traditions shared by the early Aramaic Targums and Hebrew and Aramaic Second Temple literature, in an attempt to clarify the development of each tradition individually, but also to understand the general relationship of theses two corpra, the focal question being whether the Targums have received their traditions from Second Temple sources, or perhaps vice versa.

Bio: Itai Kagan has a B.A in Bible and Hebrew Linguistics from HUJI, and an M.A in Bible and in Mandel's School's Honorary Program. The focus of his research interests is the evolution of lexemes, formulae, texts and traditions in the Hebrew and general Semitic world. This includes analysis of diachronic changes in small textual units, starting from Ancient Near Eastern sources, through the Bible, Second Temple period and up to early Rabbinic material. More generally, he is interested in philological studies of Hebrew and Aramaic texts, and in Comparative Semitics.