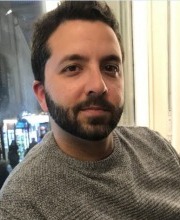 Abstract: My research will be based upon a broad comparative analysis of German film-remakes, in order to refine the categories, concepts, and keywords constituting the modern German identity discourse, from the final years of the nineteenth century to the post-Cold War Germany.
Based on current approaches to film analysis, my interpretation of the films will place the different versions in the various historical circumstances in which they were created. Through highlighting the modifications and recurrences in the different versions, I intend to outline the development of the German identity discourse throughout the twentieth century, including its contradictions, conflicts, and continuities.

Bio: I completed my B.A. and M.A. studies at the Hebrew University's History Department.