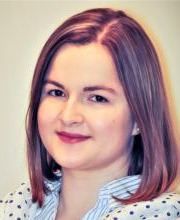 culture in the late 19th and the early 20th -century Poland and England with the main emphasis on issues such as assimilation, tradition and interception of cultures. Particularly

interested in Jews in Kraków, Kielce and London, Jewish migration, memory and preservation and commemoration of Polish- Jewish heritage.