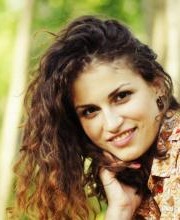 Andreea Camelia Tudor is a student of Jewish Studies at the University of Bucharest and an alumna of Paideia- The European Institute for Jewish Studies in Sweden.  Camelia is researching temporality in Kabbalah, but also intersections of history and memory, gender issues in the construction of the Holocaust narrative and psychological aspects of the trauma. From October, she will be conducting a research on the gender experience of the Holocaust in the Romanian space at the International School of Haifa University