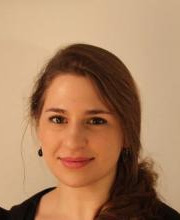 Miri is in the second year of her PhD in Medieval history, comparing and contrasting the experience of community in the everyday life of Jews in Aragon and Kehilot Shum, 1100-1347. She aims to use social history and social theory to investigate oft-overlooked halakhic issues that belie the realities of Jewish communal life. Miri holds a BA in history, and an MPhil in philosophy of religion, from the University of Cambridge. She was the Henry Fellow at Yale Graduate School 2011-12, and has spent two years learning in egalitarian yeshivot in New York and Jerusalem. She also edits academic texts in English. Working under Prof. Elisheva Baumgarten, her thesis is entitled “Everyday Life, Identity, and Communal Relations: A Comparison of Kehilot Shum and Aragon, 1100-1347.”